Navigation Tools that Helped Us Traverse the Seas before Modern Technology 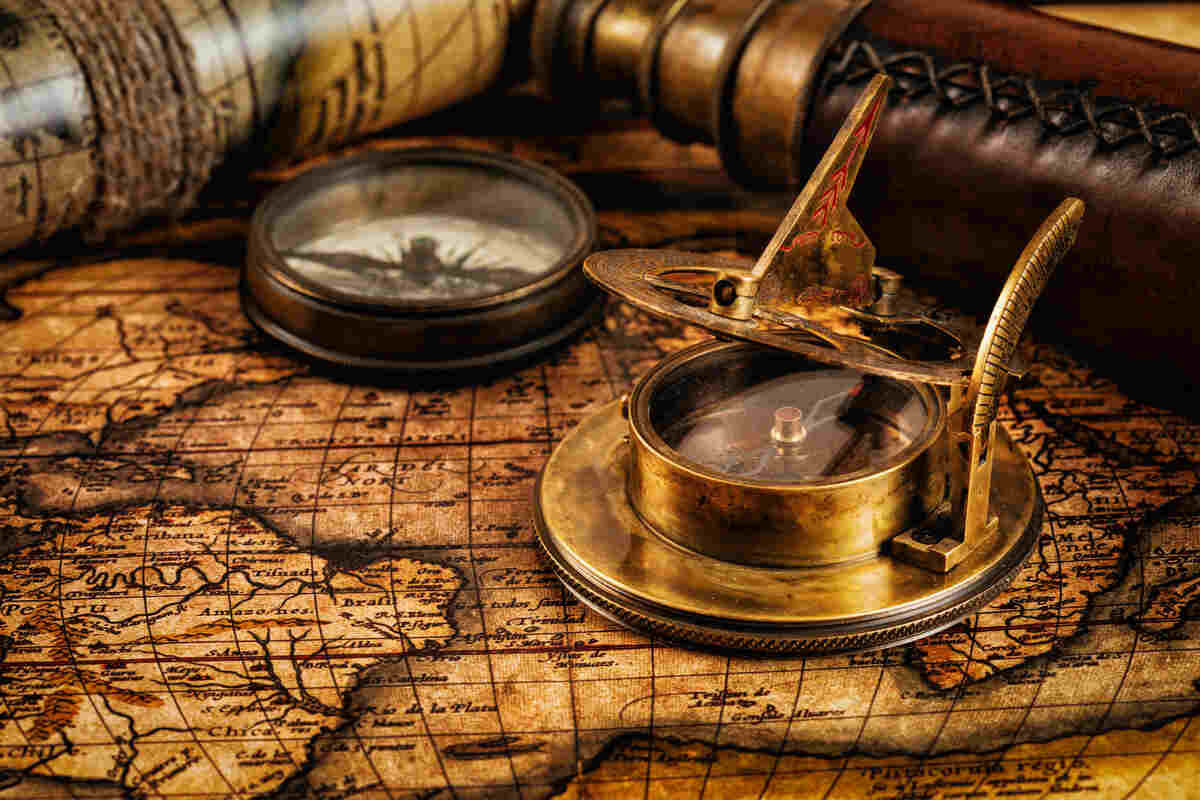 The world was never as interconnected as it is today. But modern global trade and transport are all based on the innovations of our predecessors. To honor those that came before us and enabled us to ship goods from one end of the globe to the other, let us go back and take a look at the most important navigation tools that were used in the past.

If you are interested in the history of navigation or wish to know how we got to where we are today, this article is for you. Even if history is not your field of interest, you might be surprised how similar some old ship navigation equipment is to modern tools. So let’s start.

The astrolabe is an ancient instrument that can be traced to the late Roman era, namely the 6th century CE. According to some records, it was invented by a woman named Hypatia from Egypt, although that fact may be pure myth. In any case, by the early Middle Ages, the use of astrolabes was widespread in Europe and the Middle East.

The astrolabe was primarily an astronomical tool. As a matter of fact, some people who study or have an interest in astronomy today still learn to use the astrolabe. The astrolabe became one of the earliest navigation tools when it was adopted by mariners – that version is called the mariner’s astrolabe.

Mariners would use the astrolabe for celestial navigation. They would use the Sun or stars to calculate their latitude vertically and find out their current location. While it was in use, the astrolabe served as a minor status symbol, right up until it was replaced by the octant and sextant.

The sextant is another old tool for celestial navigation. It was (and is) used to determine the angle between the horizon and the Sun, Moon, or a star, consequently calculating the latitude and longitude. It came into widespread use in the mid-18th century.

The sextant consists of an arc that is marked in degrees, a movable arm, two mirrors, and a telescope that is mounted on the frame. By lining up the telescope with the horizon and manipulating the arm (and knowing the time of day) sailors could calculate their latitude within a few hundred meters.

The sextant replaced the octant as the octant could only calculate latitude, while the sextant can be used to also determine the latitude (although another invention was needed before latitude could be determined accurately, which we will get to later in the article).

As far as the name of the octant and sextant go, both stem from Latin. Sextus means 1/6, as the sextant arc has 60 degrees, i.e. a sixth of a full circle. The same is true of the octant – from Latin octans or 1/8 of a circle, due to its arc of 45 degrees.

The first sextants were relatively large, cumbersome devices. Later advancements in maritime technology allowed the production of smaller sextants. And while the sextant is an old invention, (modern) sextants are still used on modern ships and planes. 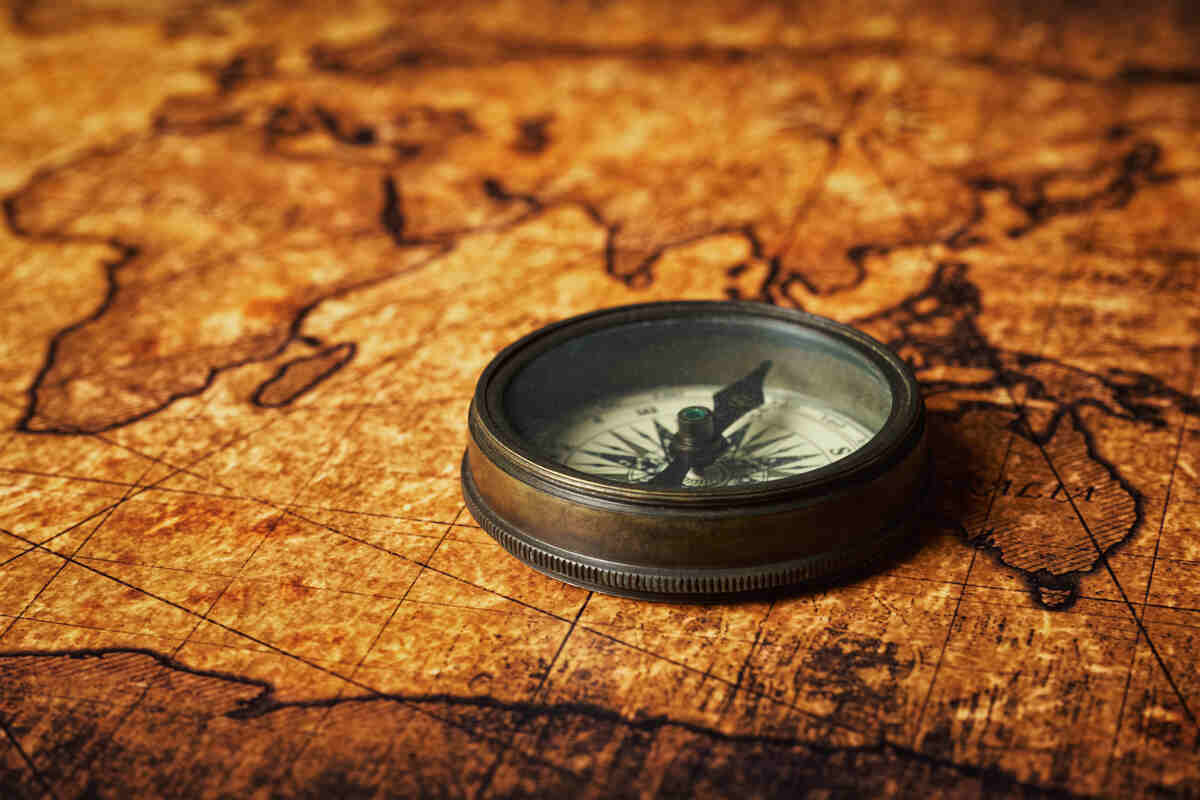 It is not possible to talk about vintage navigational tools without devoting time to the compass. When it comes to navigation, the compass is used to tell the four cardinal directions. But when it was invented in China (the first historical record of a compass is from around 206 BCE), it was used for ritualistic purposes.

Only about 800 years later was the compass used for navigation. The Chinese consider the compass one of their Four Great Inventions – the other three being papermaking, printing, and gunpowder. The earliest compasses used loadstone in a ladle (a magnetized iron ore). The loadstone would spin and align itself with the Earth’s magnetic field.

The pelorus looks much like a compass, but it does not have magnetic needles and does not tell cardinal directions. Instead, this marine navigation system was used to tell whether the ship was going forward or backward. Based on the alignment with the lubber line (the fixed line running the center of the length of the ship), ancient sailors could tell the bearing of the ship

It was supposedly named for Pelorus, Hannibal’s pilot. Interestingly, the Polynesians used the pelorus for stellar navigations before they used the compass. The pelorus, although a modern version, is still used on today’s ships. It is primarily used for piloting ships when they are nearing shore and for judging the distance between other vessels.

A chip log was an early instrument that was used to tell the speed of a ship. In its design, it is very simple. It was a spool of rope with knots tied at even intervals, attached to a wooden board. When a ship navigation officer would need to tell the speed, he would drop the board in the water.

The board would remain more or less in place and the rope would unwind as the ship moved away. The sailors would count how many knots would unwind for a set amount of time, thus telling the speed of the ship.

This practice of counting knots is where the modern measurement of a ship’s speed – knots – originates.

Finally, we get to possibly the oldest navigational instrument. If not the oldest, certainly one of the earliest recorded ship navigation tools – the lead line. It was used by sailors to tell the depth and take a sample of the seabed.

Even with all of the ancient navigation tools at their disposal, there was one problem that ancient mariners could not overcome – telling the correct longitude when out of sight of land. To accomplish this, sailors needed to accurately tell the time aboard their ship and the time at a fixed location, which was not possible until the invention of John Harrison.

John Harrison invented the first true chronometer. It could accurately measure the time at a fixed location (the Greenwich Mean Time was used). When the time at the current location of the ship was measured by observing celestial bodies and compared to GMT, sailors could tell their longitude.

The process is more complex, but that is the principle. With the invention of the marine chronometer, John Harrison enabled sailors to measure both their longitude and latitude, ushering in the era of modern ocean navigation.

Honoring the Old, Utilizing the New

Each of these navigation tools brought us one step closer to the modern era of safe and fast shipping. But the modern world brings with it new logistics challenges. If you are looking for a company that can deliver your goods safely and securely, contact Unival Logistics.

We are a logistics company that provides end-to-end logistics solutions by using tried and true methods and the latest tools. We will make sure your packages travel the best routes and arrive on time. To safeguard from unforeseen events, we provide domestic and international full-value insurance even for luxury items.

Contact Unival Logistics to have all of your shipping needs met.